The history of sweeping

A Brief History of Our Craft 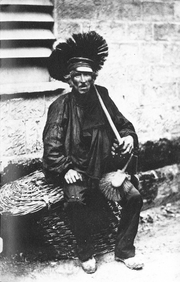 It was understood even in the Georgian period of our history that chimneys had to be brush cleaned. Way back to the 17th century the Master Sweep of the day would employ small boys to climb and scramble up chimneys. The task for these climbing boys was to brush clean the inside of the flue with small hand-held brushes. They also used metal scrapers to remove the harder tar deposits left by wood or log fire smoke.

The boys were apprentices and were bound to the trade as young as seven years old. A Master was paid a fee to clothe, keep and teach the child his trade. Sweeps’ Boys were usually parish children or orphans, though others were sold into the trade by their families. Some grew up to be Journeymen (assistants to the Master), the remainder were put out to various trades to try to learn a new occupation. In London, there was a London Society of Master Sweeps with its own set of rules, one of which included that boys were not required to work on Sundays but had to attend Sunday School to study, learn and read the Bible.

However, conditions for the boys were harsh and often cruel. They slept in cellars on bags of soot and were seldom washed. Years of accumulated soot and grime often produced cancer of the testicles. It was a dangerous and filthy job for the boys to undertake, especially without the protection of safety clothing and respirators. Sadly there are recorded instances where these Climbing Boys choked and suffocated to death by dust inhalation whilst attempting to clean chimneys. Casualties were also frequent as boys became stuck in narrow flues or fell from climbing rotten chimney stacks. 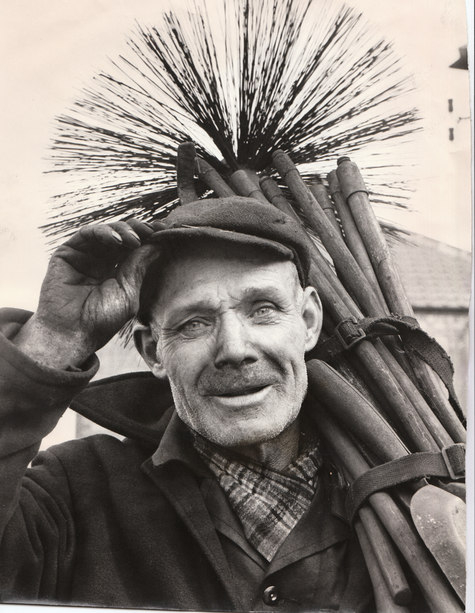 It took many years and campaigns before Acts of Parliament finally approved by the House of Lords outlawed the use of Climbing Boys. In 1864 Lord Shaftesbury brought in the “Act for the Regulation of Chimney Sweepers” which established a penalty of £10.00 for offenders.

In the early part of the 18th century various types of chimney cleaning methods were being developed. An engineer from Bristol, Mr. Joseph Glass, is widely recognized as the inventor of chimney cleaning equipment, which has become universal even to this day. This was the design and introduction of canes and brushes, which could be pushed and propelled up from the fireplace into the chimney above. Early canes were made of malacca and imported from the East Indies. Brushes were made of whale bones, no nylon or polypropylene. 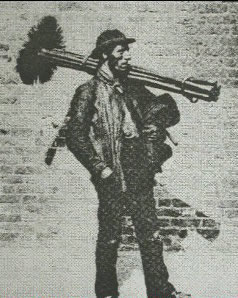 The other method of cleaning flues that was developed originally came from the Continent – Europe. This was the ball, brush and rope system which was lowered down from the top of the chimney. The weight of the lead or iron ball pulls the brush down, thus cleaning the chimney. This procedure is still used widely in Scotland even today. This is because of the historical contacts Scotland had with Europe. With the Industrial Revolution and ever greater demand for coal production, chimney sweeps grew in numbers. In Victorian London, there were over 1,000 chimney sweeps serving the area.

The continued expansion of coal as the main fuel for domestic heating ensured that the sweeping trade flourished. This was right up to the early 1960s when gas began to be installed and replace coal as a source of domestic heating. The switch to gas continued in the seventies and many of the old established family sweeps retired or gave up the business. Until this period, sweeps had traditionally cleaned only coal, wood and oil chimneys. Public awareness of the need for clean, safe and clear chimneys was almost non-existent. Carbon monoxide poisonings from blocked chimneys began to be noticed. 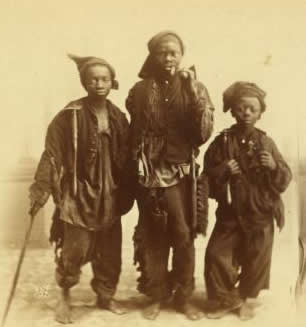 Being a chimney sweep was not lucky for the little girls and boys who had this job in the 1700’s to 1800’s. They were a type of indentured servant, bought by the chimney sweep master. The master was to teach them the trade while being responsible for housing them. Their job was to actually climb up, inside the chimney, brushing the flue as they went, and they weren’t done til their heads poked out of the chimney top. This, of course, was a scary job for these children and they were often reluctant to perform as expected. Many masters used a dangerous punishment: the child was forced up the flue then a fire was lit. Since he couldn’t come down, they had no choice but to climb up the flue. We think this is where the term “light a fire under you” originated.

These children lived in deplorable conditions. They carried a large sack with them, into which they dumped the soot they swept from the chimneys. They used this same sack as a blanket to sleep in at night, and only bathed infrequently. They were often sickly, and learned to beg handouts of food and clothing from their customers as all the money they earned went to their masters. The soot they collected was sold to farmers for fertilizer.