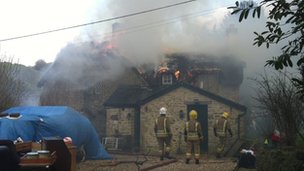 About 50 firefighters tackled a blaze which destroyed two thatched cottages in Dorset.

Ten fire engines were called to the fire at Littlebredy between Bridport and Dorchester at 16:15 BST yesterday.

The blaze destroyed the roofs of two semi-detached properties. Dorset Fire and Rescue Service said the fire is thought to have started in a chimney.

Firefighters tackled the blaze for about two hours and last night remained at the scene damping down.